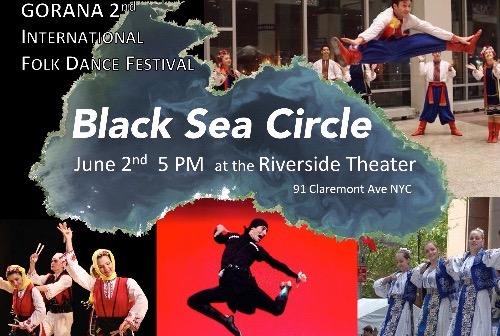 Following the success of our first international dance festival, held at Riverside Theater on Earth Day, in 2017, Elea Gorana Dance Collective is embarking on a more ambitious festival for 2018. Our second dance festival will feature the diverse dance heritage of the Black Sea Region.

This project seeks to bridge the gap between our respective communities - Immigrants and native-born Americans of Georgian, Bulgarian, Ukrainian and Romanian descent, by introducing those who are affiliated with one cultural tradition to others that neighbor their homeland. Living and working together on this side of the much larger Atlantic Ocean, provides the opportunity to contemplate the interconnections rather than the divisions between communities that historically lived across the Black Sea from each other. We seek to cultivate a larger, multi-ethnic community in NYC to strengthen the ongoing renaissance of each of the specific folk traditions celebrated in this festival.

DANCING CRANE is an ensemble which includes immigrant professional dancers  who have learned and performed since childhood in the country of Georgia. Their performances present a program of the regional dances of Georgia in the various regional costumes. Georgian dance has evolved during the past century into a sophisticated dance form which maintains the folk styles, music and costumes from the different regions in Georgia. In the 1960’s Victor Sirelson became a serious researcher, performer and instructor of ethnic dance and music with the Aman Folk Ensemble and the UCLA Department of Ethnomusicology in Los Angeles. In1996 he became involved with the study of Georgian dance and formed a collaboration with Merab Tsereteli, a former dancer with the Sukhishvili Ensemble in Georgia. A master dancer, Vladimer “Dato” Goderidze, joined the company and would become its choreographer in 1999.

BANATUL is the advanced dance ensemble of the Banatul Folklore & Soccer Club which has preserved the culture and traditions of Romania in NYC since 1968. These talented young people bring their celebration of artistic heritage to cultural festivals and events throughout the NY area. Their performances feature lively dances from almost every region of Romania.  Choreographer Madalina Constantinescu

ISKRA UKRAINIAN DANCE ENSEMBLE was founded in 2011, under the artistic direction of Andrij Cybyk. It includes the most advanced students of Iskra Ukrainian Dance Academy in addition to former students and professional dancers. The Iskra Ensemble is unique because it is an expression of Mr. Cybyk’s extensive life in dance. He views his dances as expansions of the Ukrainian Dance vocabulary. The Iskra Ensemble represents many regions of Ukraine, highlighting the colorful indigenous costumes, the individual musical styles and the particular dance movements found in each one. Andrij Cybyk is American by birth, Ukrainian by heritage and Gypsy at heart. He began his dance training in Ohio, where he studied Ukrainian and Character dance with Dave Wozniak and Markian Komichak in the ensemble Kashtan and Ballet at the University of Akron Conservatory of Dance.

Founded by Elissaveta Iordanova, Artistic Director/choreographer, GORANA DANCE naturally evolved, uniting several generations around the captivating power of traditional dance. Reviving masterfully woven tapestry of dance, GORANA DANCE features the wealth of the six major Bulgarian folkloric regions with their recognizable styles which are characterized by rhythmic complexity and exciting patterns. In 2016, GORANA DANCE celebrated 10 years of its heartfelt mission to spread the beauty of the Bulgarian folk dances in the U.S. and maintain Bulgarian folk traditions across borders. GORANA DANCE artists share their artistic expression and nurture a passion for exploring new meanings and the relevance of traditional practices in our contemporary world. GORANA DANCE performed in NYC, NY, NJ, PA, IL. (www.facebook.com/GORANADANCE)

This event has ended